Oxygen content in the surrounding air affects the oxygen intake of the human brain. In learning, the adequacy of brain oxygen affects students' readiness to begin learning, which can be observed through the concentration of student learning. Through this research, information on the effect of school air oxygen content on student concentration will be obtained. The study population was East Jakarta State High School, with a sample of SMA Negeri 9 Jakarta, SMA Negeri 91 Jakarta, SMA 61 Jakarta, SMA 71 Jakarta, SMA Negeri 14 Jakarta. The sampling technique is Purpose Sampling. To obtain information about the oxygen content of school air, measurements were carried out using a Disolved Oxsigen Meter (DO Meter) with an average result of 25.98 school air oxygen levels. validated. Data analysis was performed using exlel. The average concentration of student learning is 1.85 from a scale of 4. The results of hypothesis testing using SPSS 24 obtained tcount of 83.754> ttable of 2.776, with a significance level <0.05 ie 0.00. Furthermore, the results of the linear regression correlation test obtained r = 0.948, air oxygen levels around the school with the concentration of student learning at a sig level of 0.14 (sig 0.05). Both of the results of this analysis indicate that this shows that there is an influence of the oxygen content of the school air on the concentration of student learning with a positive correlation. 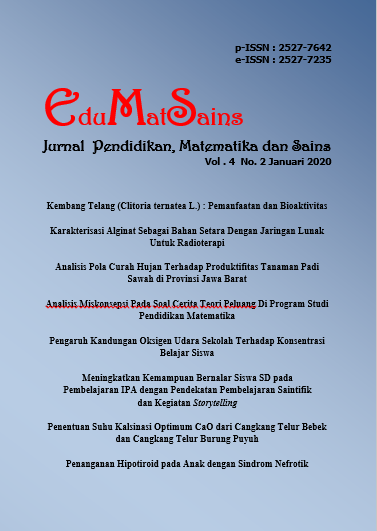